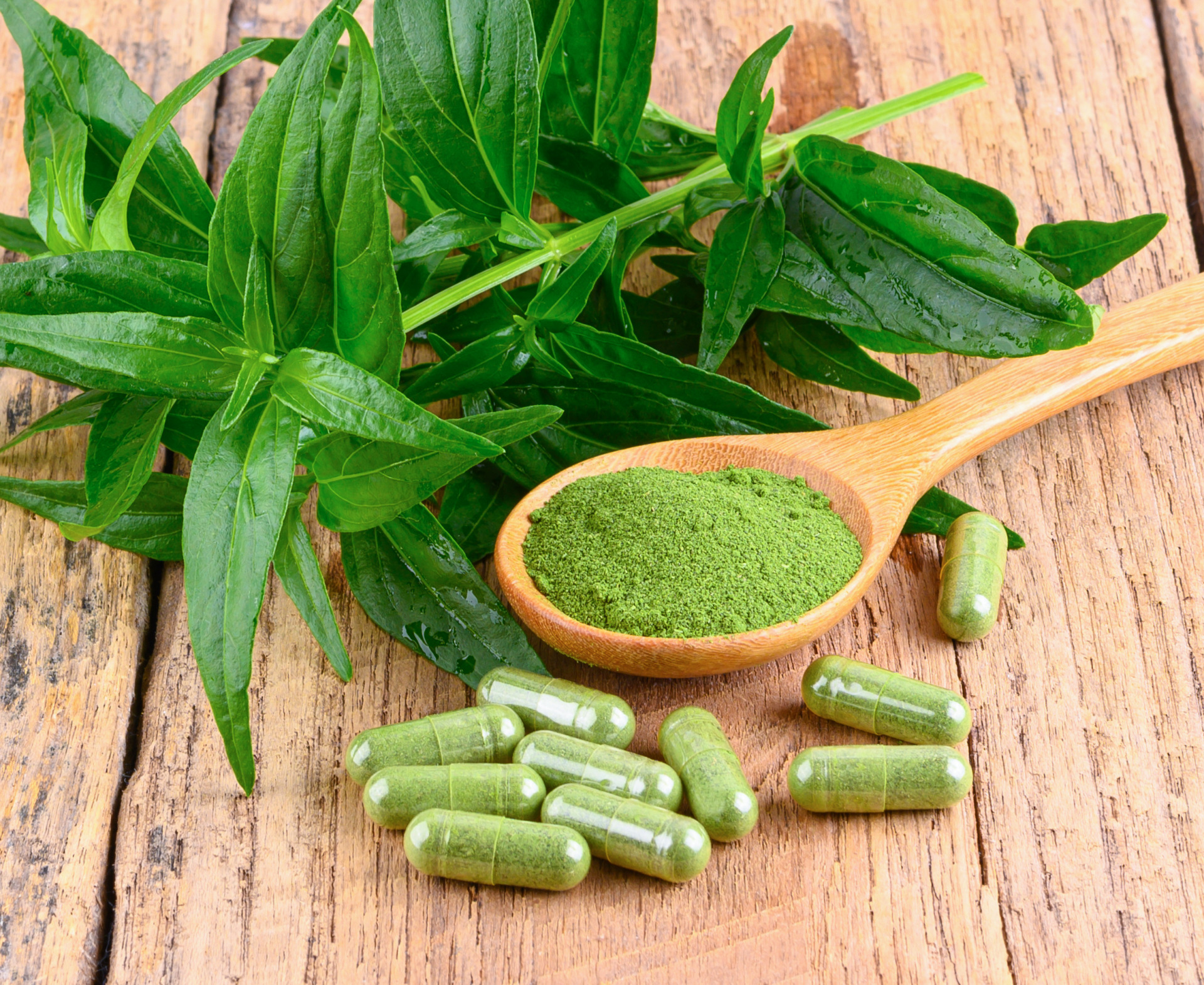 Ancient medical practices, many still in use today, form the basis of our own holistic health practices. They are founded in wisdom that heals, transforms, and brings balance to the body and mind. One of the premier herbs of the Ayurvedic tradition is Andrographis paniculata, also known as “The King of Bitters”. If you’ve noticed a common thread that binds together some of the world’s most effective natural medicines, it is that they have been tested in real life by practitioners and patients for thousands of years. Andrographis (Andrographis paniculata) may not be well known to some, but this herb has been widely used in Ayurvedic medicine in India since ancient times. Like boswellia, or curcumin from turmeric, andrographis is one of nature’s great multitaskers. While it is often associated with fighting colds and flus (and rightly so), it is another “do-everything” herb that may open new paths toward fighting cancer, heart disease, arthritis, Lyme’s disease, and more. While andrographis provides a full spectrum of compounds that prevent or stop disease, andrographolide is considered the most beneficial. You’ll find that research on the herb – no matter what disease it is studying – focuses primarily on that compound.

Andrographis has been widely used for treating liver diseases in both traditional Ayurvedic and Chinese practice. Current scientific study bears this out. Research published in the journal PLoS One shows that andrographolide from andrographis extract can be as effective as silymarin from milk thistle at reducing the damage of toxins in the liver. When a liver is continually damaged, its own efforts at wound healing can cause fibrosis (scar tissue) as the liver kicks up production of connective tissue to an unhealthy level. Andrographis stops the over-proliferation of cells that can lead to cirrhosis. Extracts of andrographis have been shown to boost the activity of glutathione and superoxide dismutase – two of the most powerful antioxidants generated by the body. It also increased the activity of Nrf2, a protein that can slow aging and cellular damage.

Andrographis is probably best known in the West as a botanical that boosts your immune system’s ability to defend you from viruses and bacteria. And no wonder: andrographis helps you get over colds and flu faster and reduces the intensity of symptoms without causing side effects. In a double-blind, placebo-controlled study, andrographis relieved key symptoms in just two days, including fatigue, sore throat, runny nose, and sleeplessness. By the fourth day, the andrographis group saw a significant decrease in all symptoms, including headache, earache, phlegm production, and coughing. Another clinical study of individuals with upper respiratory tract infection showed similar results. In this case, 223 patients either received andrographis or a placebo. By the third day, there was a dramatic difference in cough, headache, sore throat, and disturbed sleep. Andrographis also stops dangerous bacteria like Staphylococcus aureus by preventing it from replicating. Considering how resistant bacterial infections have become as a result of antibiotic over-prescription, this botanical could be a much more effective form of treatment. And, the abilities that andrographis shows for strengthening the immune system have made it an increasingly popular herb for treating Lyme disease. Transmitted by ticks, infection by the Borrelia burgdorferi bacteria first manifests itself in “bulls eye” pattern skin lesions, but can later progress to muscle dysfunction, arthritis, facial palsy, and more. However, antibiotic treatment doesn’t address the need for the body to help heal itself. In fact, Polish researchers found that patients using antibiotics to treat the skin lesion phase of the disease, still had heavy free-radical activity. Even though antibiotics in this case are standard medical procedure, the resulting oxidative damage simply weakens the system more, creating a greater opportunity for the disease to spread and do more damage. Over the past several years, the use of andrographis as part of a multi-herbal treatment for Lyme disease, or in conjunction with conventional methods, has grown.

Andrographis works along a variety of inflammatory pathways to soothe the effects of digestive disorders and prevent more serious conditions. In fact, it is still very popular in India for soothing digestive complaints. The scientific research surrounding andrographis is beginning to discover why it works so well. Ulcerative colitis (UC) can increase your risk of colon cancer because of the damage caused by chronic inflammation. But andrographis can reduce that risk and has the potential to alleviate the symptoms of UC. Scientific research found that its key compound, andrographolide, lowered levels of inflammatory markers and prevented further reactions in colon cells. Andrographis may also protect the stomach lining against gastric ulcers. Scientific research has shown that pretreatment with an extract of the herb increased pH balance and made the environment of the stomach less acidic. This, along with a boost in gastric mucous production and direct antioxidant action, reduced the risk of forming lesions in the stomach wall. Andrographis has shown similar protective abilities for intestinal ulcers. It preserves mucin – a protein that helps create the mucosal lining in the duodenum – and stabilizes the balance of healthy glutathione, our own powerful antioxidant that prevents cellular damage.

Andrographolide from andrographis is also being studied for its adaptogenic properties – its ability to bring our mental and physical health into a state of homeostasis, much like rhodiola and ashwagandha. There is leading-edge scientific research that shows that andrographis (in some cases combined with eleuthero) may reduce the symptoms of brain fog in patients undergoing chemotherapy. Andrographis may also work with chemotherapy drugs in reducing breast cancer cells, so it has potential as a co-treatment with conventional medicines. Other laboratory research has found that andrographolide over time can decrease reactivity to stressful situations. Clinical research also shows that andrographis reduces fatigue in individuals with multiple sclerosis. Overall, the actions of andrographis – lowering stress levels, helping brain cells communicate more clearly, and boosting energy levels – makes an excellent adaptogenic herb.

Cellular damage throws our DNA replication process into chaos and triggers tumors. Scientists have linked andrographolide from andrographis to stopping the cycle of melanoma cancer cell growth. Based on past statistics and the fact that the rate of melanoma has been growing for the past 30 years, the American Cancer Association predicts that over 90,000 Americans will be diagnosed with this form of skin cancer in 2018 alone. This is a prime reason for anyone who spends a lot of time outdoors to arm themselves with supplemental andrographis. Similar results have been seen in studies of pancreatic cancer cells and in glioblastoma cells, an aggressive form of brain cancer. Andrographis has also been shown to stop the growth and formation of pancreatic tumor cells, and suppress the ability of glioblastoma multiform cells to migrate. In each study, andrographolide worked along different pathways, showing the versatility of this compound. Overall, a recent review showed that this one component of andrographis stopped tumor replication in virtually every type of cancer tested and addressed virtually every mechanism, including inflammation, oxidation, cell replication, and cancer cell invasion. The report concluded, “After careful consideration of the relevant evidence, we suggest that andrographolide can be one of the potential agents in the treatment of cancer in the near future.”

AN AYURVEDIC ANSWER FOR COMPLETE HEALTH

Andrographis shows astounding abilities to enhance your life. It is simply one of the most impressive herbal multitaskers in the world, and can help prevent or potentially reverse a multitude of diseases. For the best results, look for a blend of extracts that concentrate andrographolides. I believe that andrographis, like curcumin, boswellia, and grape seed extract, is a botanical that can save lives, and I thoroughly encourage you to discover it for yourself.