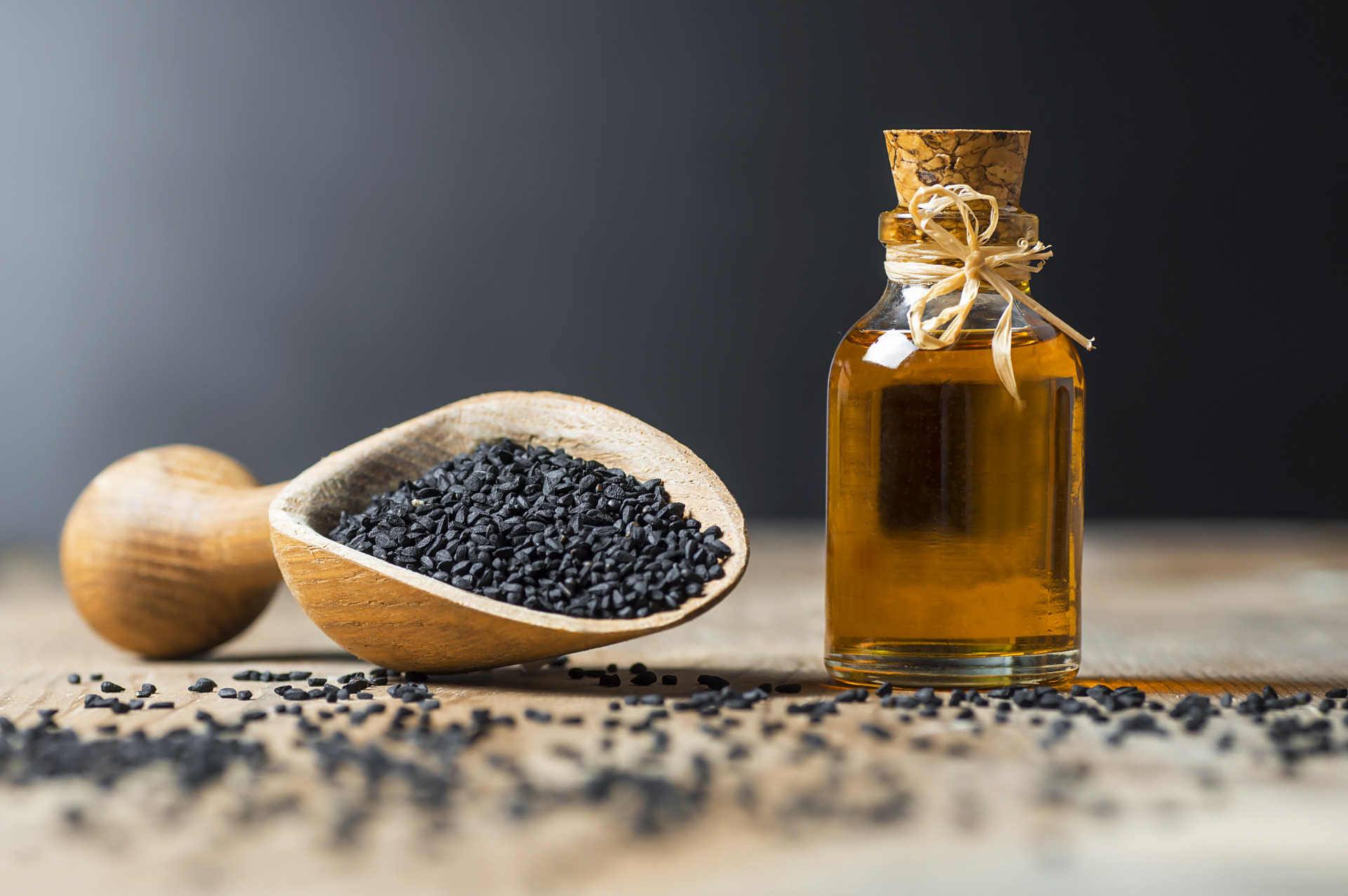 The incredible power of botanical medicines has been proven for thousands of years in traditional practices around the world. However, it often feels like we’re just beginning to catch up to what other cultures have known for generations.  In Middle Eastern and Asian traditional medicine, black seed oil (black cumin, Nigella sativa) was prescribed as a tonic for virtually everything, including respiratory diseases, infections, digestive disorders, muscle pain, and many other conditions. In fact, one of the old sayings about black seed oil was that it “cured everything but death.”  In recent years, black seed oil has drawn some much-deserved attention from the scientific community, and there’s a good reason for this – it has shown an incredible ability to protect cells from developing into cancer, reduce inflammation, preserve mental function, stop pain, and fight infections.

One of the most exciting things about black seed oil is its potential to slow tumor formation. Studies on cancerous cells show that a primary compound in black seed oil, thymoquinone, disarms the cancer cell’s ability to defend itself from our body’s natural cancer-killing systems. Thymoquinone has also been shown to increase the activity of the body’s own tumor-stopping gene, the p53 pathway, to prevent the cycle of (harmful) cell creation or stop the process if it has already occurred. Black seed oil can selectively target cancerous cells for destruction while simultaneously protecting healthy, normal cells from harm.

Thymoquinone from black seed may also work as an adjunct to conventional cancer treatment. In a study of human cancer cells, researchers combined thymoquinone with doxorubicin, a chemotherapy treatment that has severe side effects, including cardiovascular damage. While black seed oil has its own tumor-reducing capabilities, the study found that it bolstered the activity of doxorubicin, even with multi-drug resistant cells. Findings like this and additional research could lead to black seed oil being used for integrative approaches to fighting cancer, with less of the conventional drug and reduced side effects and risks.

Black seed oil shows great promise in protecting brain cells from damage. In laboratory studies using animal models, thymoquinone from black seed oil helped alleviate brain injury and reduced the severity of epileptic seizures, improved memory and learning abilities, and reduced inflammatory markers in the brain.  Studies have also shown that black seed oil may be useful for helping prevent brain damage in cases of stroke and could reduce the risks of Alzheimer’s disease by preventing the development of plaques in the brain that block neural signals.  In a nine-week study, volunteers using a Nigella sativa supplement showed a significant improvement over a placebo group in recall, attention, and cognition tests. Another clinical study found that black seed improved recall memory and reduced anxiety in adolescent males in just four weeks.

Like many powerful botanical ingredients, black seed oil shows both antifungal and antibacterial effects. In one scientific study, it effectively inhibited the growth of Candida albicans by 5-fold in the kidneys, 8-fold in the liver, and 11-fold in the spleen.  Other work has found that black seed has a strong effect against a variety of bacteria, including Staphylococcus aureus (staph infection), and Pseudomonas aeruginosa, a drug-resistant bacteria that affects individuals recovering from surgery or with weakened immune systems.

Thymoquinone from black seed inhibits inflammatory markers, including 5-lipooxygenase (5-LOX) and 5-hydroxy-eicosatetraenoic acid (5-HETE), both involved in allergic and asthma responses. The fact that black seed oil can inhibit 5-LOX inflammation puts it into a special category of herbs, along with Boswellia serrata, making it an extremely valuable ally for treating asthma, allergies, irritable bowel syndrome, or Crohn’s disease.

Given the strong anti-inflammatory effect of black seed oil and its ability to counter oxidative stress, it’s not surprising that it also protects the digestive system. In scientific studies, thymoquinone from black seed has been shown to reduce acid secretion and proton pump activity and protect the mucosal lining of the intestines against injury.

Black seed oil can reduce the sensation of pain, not by simply blocking pain receptors, but by inhibiting a variety of other inflammation pathways in the body.

A double-blind, eight-week placebo-controlled clinical trial found that black seed oil reduced levels of inflammatory markers in individuals with rheumatoid arthritis. It also boosted levels of an anti-inflammatory cytokine (IL-10) leading the researchers to conclude that it could be an effective natural medicine, and one that could be safely used alongside conventional medications to treat arthritis.

What I’ve outlined here is just a snapshot of the potential of black seed oil. I believe that it is one of the most versatile and potent herbal ingredients available. While Nigella sativa has been valued for centuries, it has also been well studied, with new clinical trials and scientific investigations in the works that validate its incredible power.