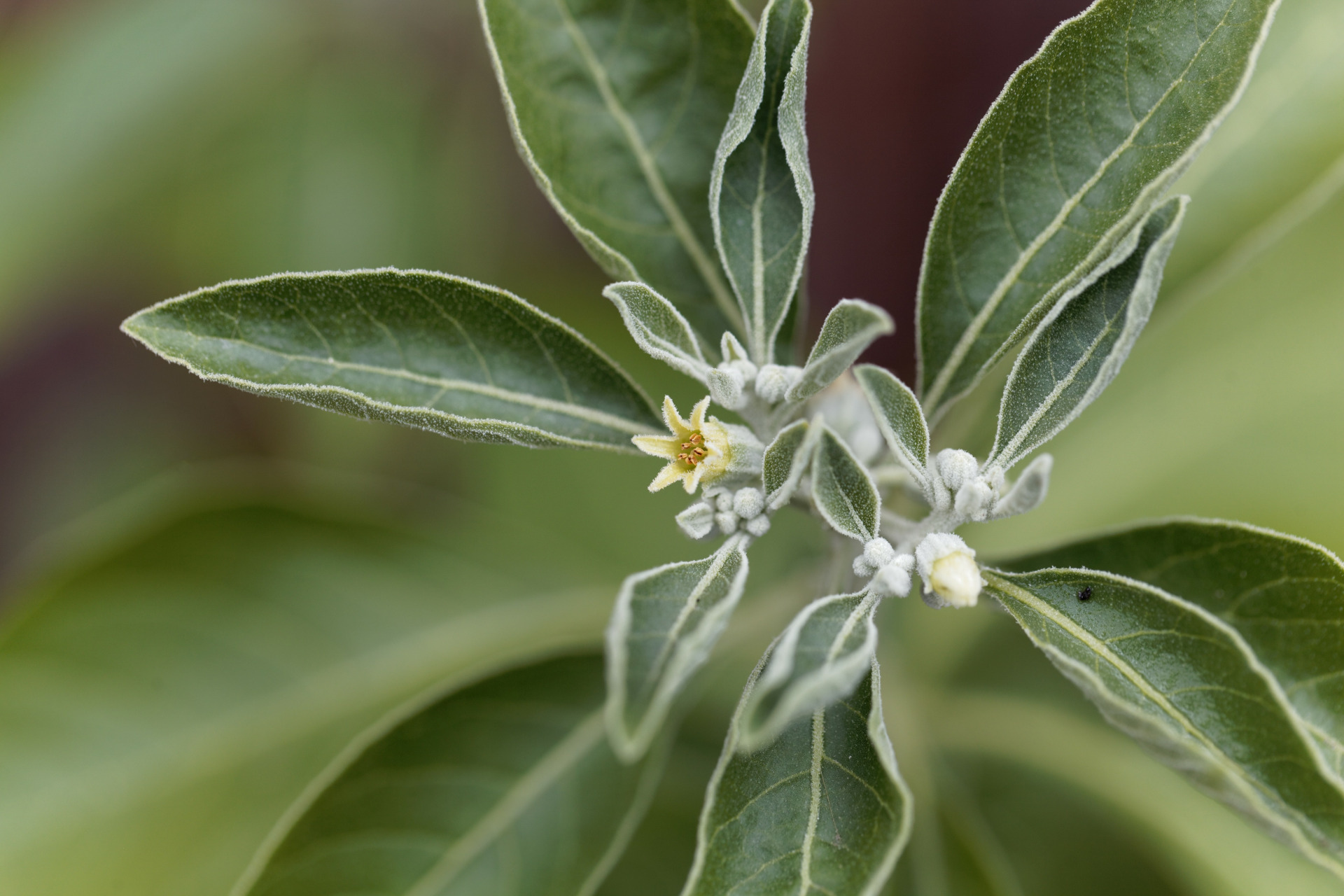 Improve Your Stress Response with Ashwagandha

Ashwagandha (Withania somnifera) is a highly valued adaptogen in Ayurvedic medicine, one of the oldest healing systems in the world, practiced in India for over 5,000 years. Practitioners of Ayurveda incorporate diet, meditation, breathing, yoga, purification (detox), massage, and herbal extracts in their treatment plans to restore patients to a state of balance and good health.  Traditionally, ashwagandha has been prescribed for many things: calming nerves, reducing inflammation, and increasing both libido and stamina. It has the special ability to be energizing and calming at the same time. Ashwagandha has also been recommended for arthritis and joint pain, so it is an excellent all-around herbal adaptogen for just about everyone.

In clinical studies, ashwagandha has been shown to reduce cortisol levels and increase protective antioxidant activity. The result is that people feel less “fight or flight” and calmer. Ashwagandha also helps fight other stress-related complications, including some of the most serious issues:

Other work has shown that one of ashwagandha’s unique abilities is to bring a variety of different hormones back into balance. It brings up what is too low and takes down what is too high. One 8-week clinical study of middle-aged, overweight men found that ashwagandha increased testosterone levels by almost 15 percent and beneficial DHEA-S levels by 18 percent. That can do a lot to restore vitality to a man who is feeling chronically tired and listless.

Another clinical study found that ashwagandha significantly reduced stress in men and women, according to a common anxiety measurement scale.  The researchers noted that it did this in four different ways: Through the HPA axis: Ashwagandha may regulate how much cortisol and DHEA we generate in response to stressors. People taking ashwagandha have lower levels of these compounds in the morning, which suggests that it may be working to lower stress levels, and by extension, how much of these natural chemicals the body produces. Stopping oxidative damage: Ashwagandha is a powerful antioxidant. The demands that free radical damage puts on the body and mind can’t be overstated. This herb puts a stop to that cycle. Reducing inflammation: Ashwagandha

is also a powerful anti-inflammatory. Inflammation and oxidation are two major factors in stress, depression, and many chronic illnesses. Working directly with brain chemistry: Ashwagandha influences GABA and serotonin activity. Each of these actions working in synchronicity appears to be the reason this herb is so effective at helping people become resilient to stress.

Increase Your Stamina with Ashwagandha

Of course, not all stress and exhaustion are necessarily brought on by our mental state or some other type of deep-rooted issue. Sometimes, we’re just plain tired. Or, we simply want to do more and have better endurance. Ashwagandha can help here, too. Consider this study that focused on the performance of 40 elite cyclists, 20 male, and 20 female. Recognizing that the sports nutrition field is teeming with products that claim to improve aerobic capacity, researchers decided to try a traditional, yet updated, approach.  They used ashwagandha. The 8-week study was broken into placebo and treatment groups. At the beginning of the clinical trial, these elite athletes were examined via treadmill test for their maximal aerobic capacity (the rate of oxygen uptake by the body that fuels red blood cells), and the respiratory exchange ratio (how much oxygen is inhaled versus how much carbon dioxide is exhaled). The researchers also measured the total time until the athletes reached a point of exhaustion. In every parameter, the botanical group improved. Ashwagandha boosted the endurance of these athletes and improved the intensive interplay between the ability of the lungs to bring in oxygen to fuel red blood cells, and the heart’s ability to pump those red blood cells to the muscles in the body. The placebo group showed no change at all.

We will always have some stress in our lives. The important thing is the way that we face it. Ashwagandha is an incredibly valuable herb that helps you during times of physical or psychological stress. It allows you to adapt, stay resilient, be physically and mentally energized and helps you respond wisely to any challenges that come your way.